After bringing you a poem for the last How We Live Now we’ve gone even further outside of the (2m) box with a beautiful set of “isolation portraits” by photographer extraordinaire, Fran Monks (not directly an FBA client, but the wife of one).

Here’s Fran herself on this project:

As my paid commissions were all being postponed, I really wanted to use portraiture to document this extraordinary time where so many of us are isolated at home. We were all communicating a lot more on video calls and I had long considered this as a potentially interesting way to photograph people. The pandemic gave me the perfect opportunity to experiment. At first I photographed people quite close to their devices, but I slowly began to realise that it was much more interesting to include more of the environment in the picture. I have to collaborate with people, asking them to position their laptop or tablet on the other side of the room while I direct them from afar. It is a really fun way to work, although bandwidth, webcams and light all present big challenges. I decided that I would make the final image by photographing the screen, because I like the strange artefacts which appear. Even though the images are made by layer upon layer of digital process, I enjoy the fact that the black border of the computer screen is somewhat reminiscent of a dark room print from a negative.

What a strange and unsettling time to be 39 weeks pregnant… This is Laura, who quite rightly pointed out to me that as it’s her first child, she doesn’t really know for sure what things would have been like without COVID19. She does realise that her midwives wouldn’t have been wearing masks during her check ups, that those check ups would have been at the GP’s surgery rather than a Children’s Centre and that her baby showers wouldn’t have been cancelled. Some of Laura’s pregnant friends have even found themselves having their prenatal check ups in the local football stadium… (NB – special thanks to Bonnie the dog who joined in the photoshoot at just the right moment!) 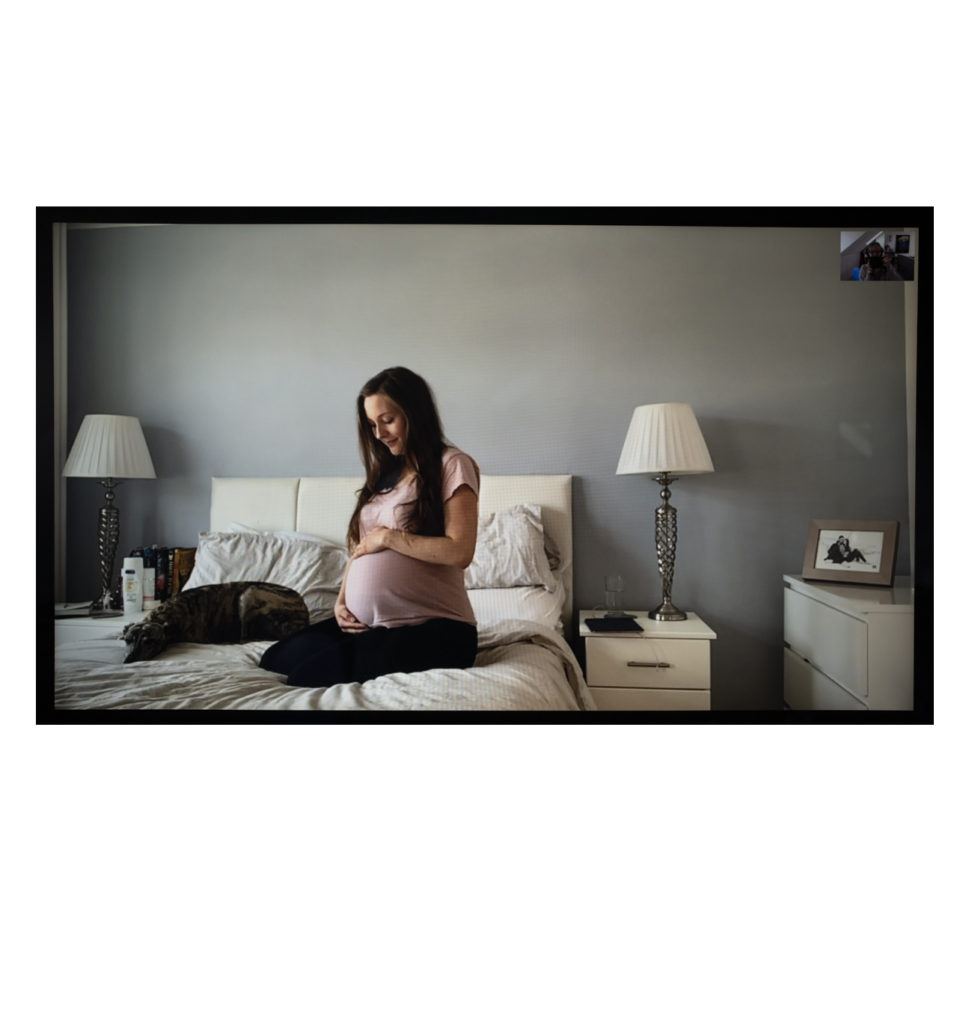 Sally lives on her own, and when I made this portrait had already been social distancing at home for over three weeks. She works for the Deliveroo technical team, so working remotely is quite easy from a practical point of view. But she finds it hard being stuck at home working alone. She misses the human contact. At the end of each day, Sally takes a half hour walk outside. At the weekend, she has been walking around the deserted streets of the City of London. In normal times Sally says she could easily spend 5 or 6 hours outside at the weekend. She loves swimming and was planning on taking a sabbatical this year to swim in all the lidos around the UK… 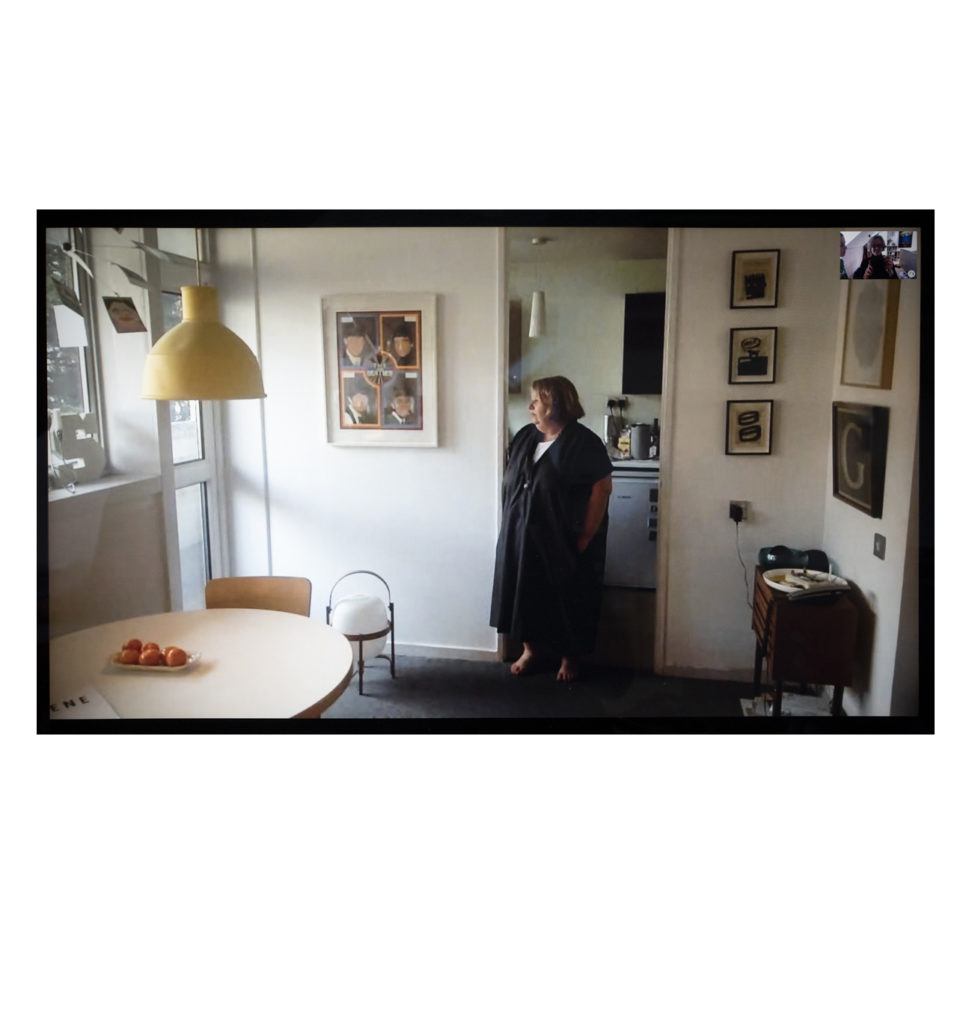 Jeb started Social Distancing about a month before lockdown. This is because he is in a vulnerable group and also, as a self-professed twitterholic, has been reading about the severity of the #CoronaCrisis for quite some time. Sixty-eight and retired, Jeb used to be a freelance programmer, and would often spend lots of time at home, alone, in front of a computer screen. So, this lifestyle is not too unfamiliar to him. In those days a call with another programmer would often turn into an hour long chat. Any work issue would be quickly resolved, but then the human connection would be the thing to be enjoyed… 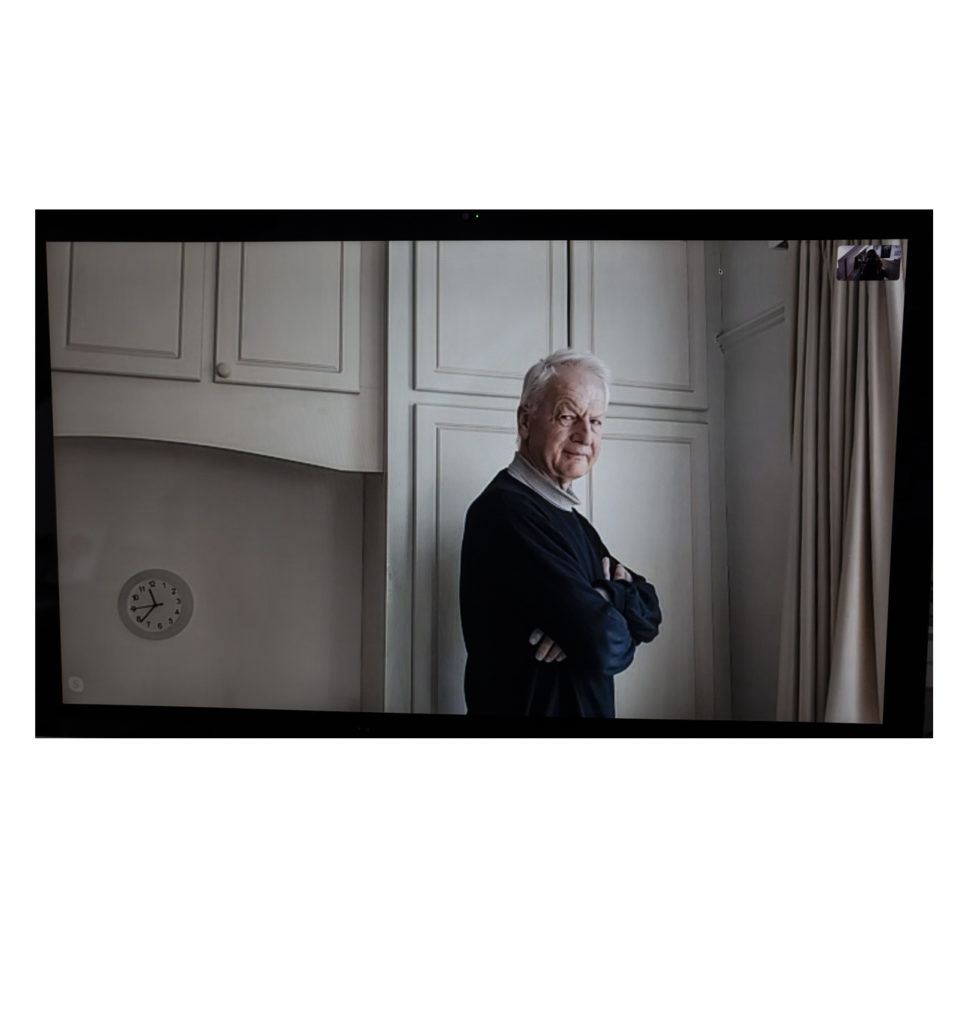 This is Amelia, in her attic in Spain. Amelia was well into lockdown by this stage. She has a five year old and a three year old, so the pace at home is fairly relentless. I was sograteful that her husband could take over for ten minutes and let us make this portrait. Amelia lives on the south coast of Spain and said all beaches are cordoned off with tape. Police cars are patrolling to ensure that people stay inside. They are still allowed to go out to the shops for food, but when they do, the numbers of shoppers are limited and everyone has to wear gloves. Amelia’s mother-in-law had recently come to Spain to be near her grandchildren, but she is now isolated in her own apartment, five minutes away from them… 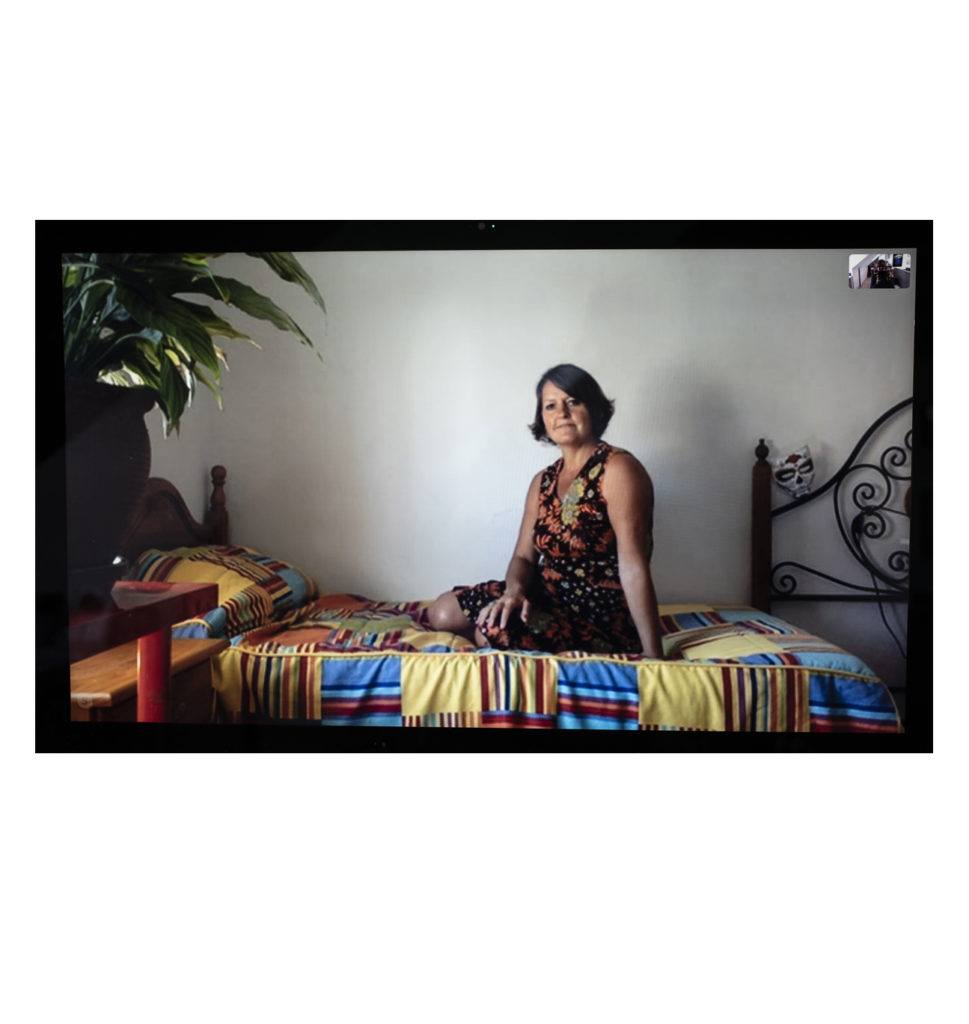 This is Sally, the author of Girl with Dove, whom I met via Zoom. She’s been social distancing on her canal boat since lock down. I absolutely love the light on canal boats, so I was excited about how these pictures would work out. A few years back I did a whole series of portraits of canal dwellers around Oxford, in person. Even via video chat, I think that the boat light makes this image rather special. As a writer, Sally is quite self sufficient and has plenty to keep her busy. She’s finished the sequel to her first novel and is now working on the third. She’s also been teaching creative writing online, which she is enjoying more than she expected. She loves walking and wild swimming and has been happy to be able to continue with those things, but the one thing she does miss is sitting in cafes and writing. “Most writers are eaves droppers and anthropologists,” she says. “It’s hard to do either of those when you are socially distancing…” 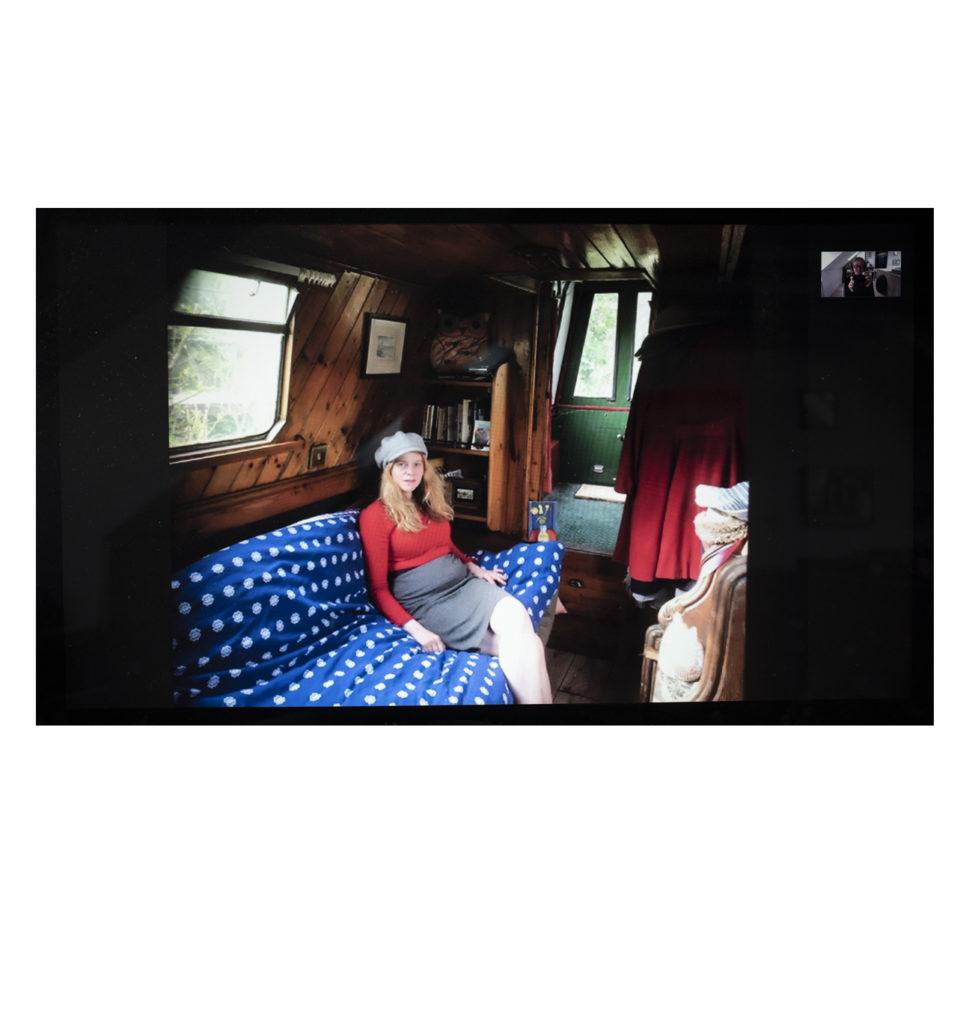 This is Josh, the arts editor of @newshour who interviewed me about my social distance series of portraits. He’s been at home in Washington DC since lockdown, and interviewing lots of people about their different experiences. I couldn’t resist but make a skypeportrait of him, even though his Dell laptop had one of the notorious “NoseCams” we had fun propping it up and making the best image we could with it…. 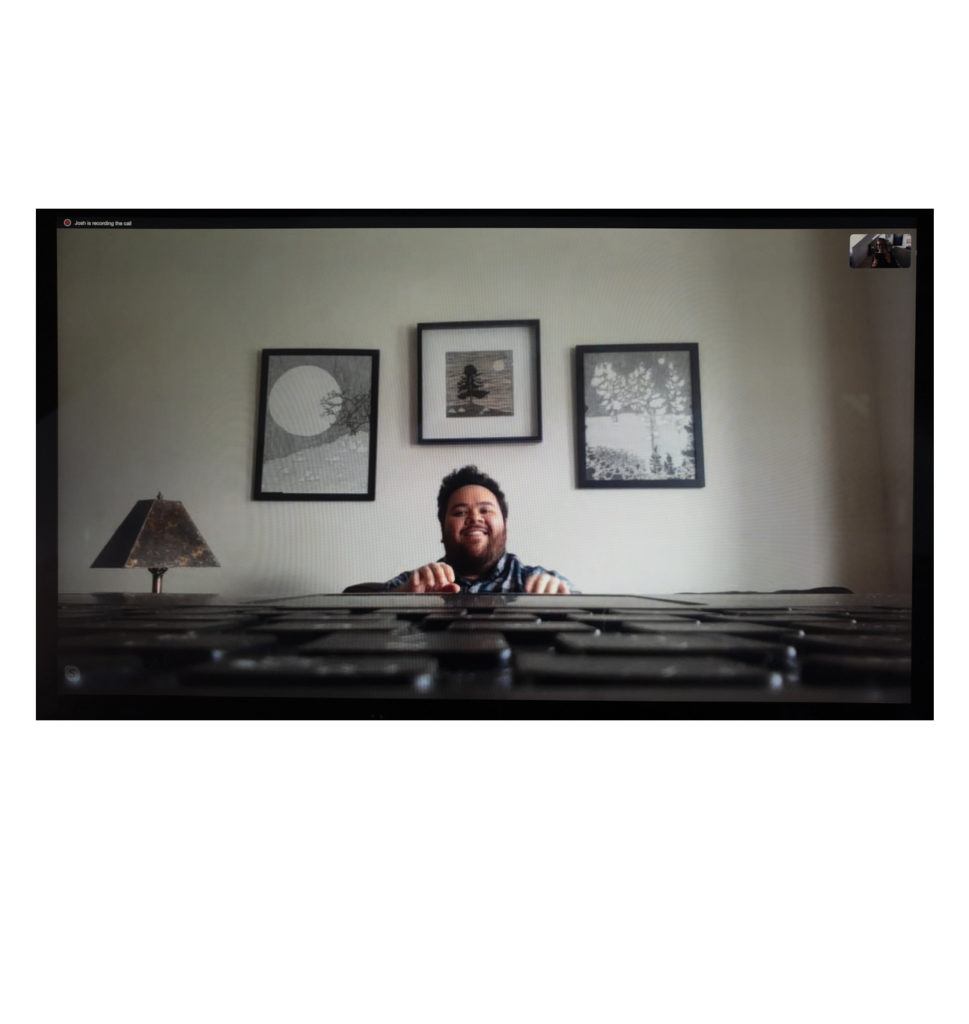 ~
As mentioned, Fran Monks is a professional portrait photographer, and also the wife of Tim Harford, whose The Next Fifty Things that Made the Modern Economy is available for pre-order now (“Every Tim Harford book is a cause for celebration” – Malcolm Gladwell). You can follow Fran on Twitter, view more of her amazing photographs on her Instagram, or contact her regarding commissions via her website.

This piece is part of a series in which artists respond to the worldwide pandemic. You can read the others in the How We Live Now series here.