This Week: The Craft and Inge’s War 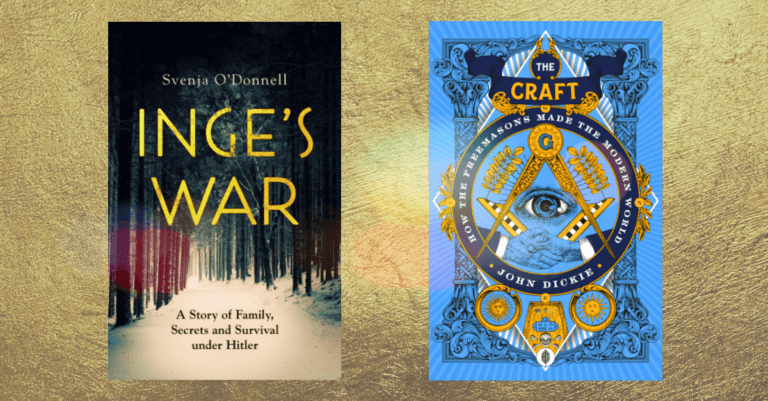 After the lockdown-induced lacuna, things are picking back up in publishing terms, and following July’s sweeping, sparkling THE HISTORY OF MAGIC: FROM ALCHEMY TO WITCHRAFT we have two more non-fiction blockbusters hitting the shelves…

Insiders call it ‘the Craft’.

To the rest of us, Freemasonry is mysterious and suspect. Yet its story is peopled by some of the most distinguished men of the last three centuries: Winston Churchill and Walt Disney; Wolfgang Mozart and Shaquille O’Neal; Benjamin Franklin and Buzz Aldrin; Rudyard Kipling and Buffalo Bill; Duke Ellington and the Duke of Wellington.

Founded in London in 1717 as a set of character-forming ideals and a way of binding men in fellowship, Freemasonry proved so addictive that within two decades it had spread across the globe. Under George Washington, the Craft became a creed for the new American nation. Under Napoleon, the Craft became a tool of authoritarianism and then a cover for revolutionary conspiracy. Both the Mormon Church and the Sicilian mafia owe their origins to Freemasonry.

And as the author of the million-selling mafia bible, COSA NOSTRA, Professor John Dickie should know.

Both the Times and its Sunday counterpart went big on the book this weekend with full-page splashes, the former also making it the paper’s Book of the Week:

‘The Craft is a superb book that often reads like an adventure novel. It’s informative, fascinating and often very funny. The depth of research is awe-inspiring, but what really makes this book is the author’s visceral understanding of what constitutes a good story.’ – Gerard de Groot

‘Dickie takes on this sensational subject with a wry turn of phrase and the cool judgment of a fine historian… I enjoyed this book enormously. Dickie’s gaze is both wide and penetrating. He makes a persuasive case for masonry’s historic importance.’ – Dominic Sandbrook

BUY THE CRAFT: HOW FREEMASONS MADE THE MODERN WORLD 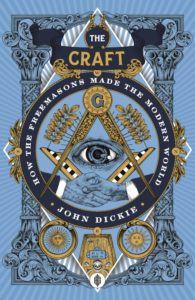 And also scooping plenty of admiring column inches ahead of a Thursday release is Svenja O’Donnell’s extraordinary and deeply moving account of her grandmother’s life, a story of secrets and survival under Hitler, INGE’S WAR.

‘It feels increasingly urgent to remember the lessons of World War II and I cannot think of anyone better than Svenja O’Donnell to navigate us through this particular slice of history. A lyrical, engrossing and essential read.’ – Sathnam Sanghera

‘Svenja O’Donnell turns her skills as an investigative journalist to unearthing a vitally important, powerful, and painful family story from World War Two. I was gripped as Inge’s War revealed secrets within secrets, and exposed the dark realities of ordinary people’s wartime lives to the light.’ – Suzannah Lipscomb

Both the Telegraph and the Herald featured glowing full-page reviews over the weekend, with the promise of many more to come for this beautiful blend of history and memoir by one of Europe’s most brilliant journalists.

BUY INGE’S WAR: A STORY OF FAMILY, SECRETS AND SURVIVAL UNDER HITLER 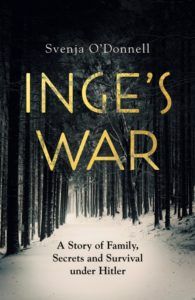