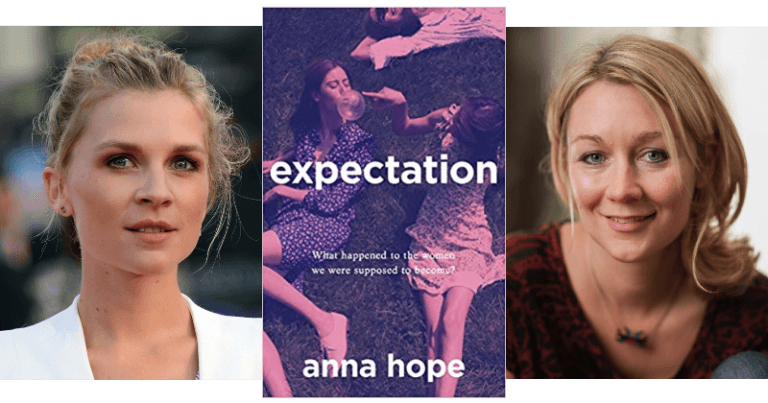 Anna studied English at Oxford before training at RADA, writing between jobs in Doctor Who, Waking the Dead, and Coronation Street. After taking short story courses at in London, she put acting on hold to study for a Masters in Creative Writing, and her first novel Wake was published in 2014 and subsequently translated into 11 languages, with the Observer calling it ‘a masterclass in historical fiction’. It went on to be chosen as a Radio 2 Bookclub read and shortlisted for the Historical Writers’ Association Debut Crown, leading to Anna being nominated for New Writer of the Year at the National Book Awards.

Expectation, her third book, was published to huge fanfare in summer 2019, drawing comparisons to Sally Rooney as well as praise from Marian Keyes, Elizabeth Day, Pandora Sykes, and Bryony Gordon, among others.  A paperback is expected late-April 2020.

Hannah, Cate and Lissa are young, vibrant and inseparable. Living on the edge of a common in East London, their shared world is ablaze with art and activism, romance and revelry – and the promise of everything to come. They are electric. They are the best of friends.

Yet ten years on, they are not where they hoped to be. Amidst flailing careers and faltering marriages, each hungers for what the others have. And each wrestles with the same question: what does it take to lead a meaningful life? What happened to the women we were supposed to become?

As well as having written and directed three short films, Clémence is one of France’s most admired actresses, best known in the English-speaking world for playing Fleur Delacour in the Harry Potter series, Rana in Danny Boyle’s 127 Hours, and Chloe in Martin McDonagh’s In Bruges.  Haut et Court have been making films and television programmes for over 25 years, with recent successes including The Young Pope and Les Revenants (The Returned).