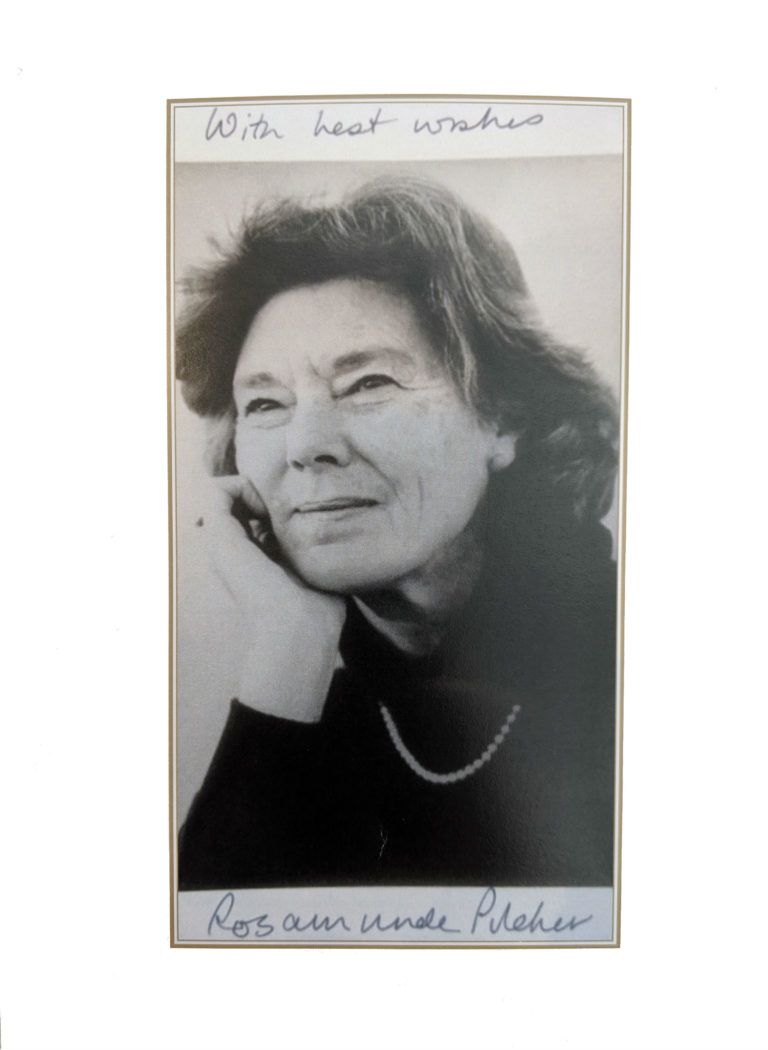 It was in 1973 that I first experienced Rosamunde Pilcher with her keen eye and her gentle wit.  We were having lunch. I was a fledgling agent at Curtis Brown literary agency which had represented Ros for her short stories and novels since 1948.  By now I had read some of her novels and realised what a glorious and engaging writer she was: this was no ordinary romantic novelist!  We had immediately felt at home with each other.

Of all the qualities that spring to mind when I think of Ros I would say that listening was her first expertise. I was subtly grilled about my Yorkshire family, my background in journalism, my travels, all of which were of huge interest to her.  When I paused for breath she said: “I bet you’ve never read Woman’s Own!” Years later she told me that I replied that it was never too late to start….

She then led me on a mystery tour of the ins and outs of Romantic fiction publishing – in particular magazines, which were then her main source of income.  She had close relationships with – and was much loved and admired by – the literary editors of Woman’s own, Woman’s Weekly etc.  She knew exactly what they wanted and she delivered it.  A 62,000 word novel with five cliff-hangers made a six-part serial in Woman and Home.  I could see she was a true professional who could teach me a lot.

She was also a terrific appreciator.  When some years later Tom McCormack, a US publisher, dropped by my office and said he was ‘looking for romance’ I pressed two Pilcher novels into his hand.  His young editor Tom Dunne loved them, bought the rights, came back for more, encouraged her to write longer, more challenging novels – and the rest is history.  Alice told me that when Pippa called from America to say that Shell Seekers was number 1 on the New York Times Bestseller List Ros danced round the kitchen table in excitement singing “I’m numero uno”.

Ros never ceased to thank me for making that first American connection.  So when thirty years ago I set up my own literary agency she loyally came with me.  Something for which I could never show my gratitude enough.

So in 1988 we both started a new life together:  she as an international best-seller and me as an independent agent with this amazing client of whom I was so, SO proud.

And what fun we had!  Ros was one of life’s great enjoyers.  When in 1992 the German TV station ZDF bought the rights in eight of her early, shorter novels they invited her to the annual international TV festival in Cannes.  Graham couldn’t come. “Would you like me to come instead?”, I asked.  “Would you mind?’ she said. “It would be much more fun.  I’ve never been to the South of France before.’

It was my first experience of Ros as the international star.  As Fiona said, she took to the role like a duck to water.  We were put up in the Hilton on the Croisette, swam in the pool on the roof, met Charlton Heston in the lift, dined with her producer Michael Smeaton and mingled with the big wigs of TV and film – all of whom jostled to meet her.

On our final evening ZDF hosted a dinner for Ros taking a whole floor of an Italian restaurant. Most of the guests were potential buyers of TV rights in her stories.  So we were on our best behaviour.  The wine flowed and Ros was enjoying herself charming Claus Behling, the head of Drama at ZDF (who later became a great friend).  We had not been warned about the speech given by ZDF’s very formal Head of Enterprises.  When he sat down he said “and now Mrs Pilcher will speak to you”.

Ros looked surprised.   She rose, slowly, elegantly.  She thanked her hosts.  What a magical time we had had etc. etc. and then she said the words that I shall never forget: “When I heard that ZDF had bought the rights I my ‘little’ books I thought ‘how clever of them’.  Because, you see, they read like scripts.  None of them took very long to write.  There is no depth in them………….”  As you can imagine, that was not what her hosts had wanted.

The German TV series was a sensation and still is – by now around 140 films from Ros’ stories have been shown and her publishers Rowohlt have sold over 15 million books.

Those of us who accompanied her on her many German trips – to receive awards, attend the Frankfurt Book Fair – saw her received like a queen and recognised in the street. Only last night Stephen Durbridge, Ros’ film agent and his wife Jane were describing the gangs of paparazzi around her limo when she given the Freedom of the City of Berlin.

What was her secret?  Of course her novels are completely absorbing, but they are also direct and true to real life. In her capable hands she raised ‘romantic fiction’ to an altogether higher level. Her feeling for the texture of a place and people’s relationship with it is positively Hardy-esque. She explored themes of family, love and loss with a grittiness and fearless, unromantic observation that set a benchmark for younger novelists.

Sue Fletcher, Ros’s editor at Hodder, wrote ‘Ros’ writing, like Ros herself, displayed warmth without sentimentality, and it was this quality which struck such a chord. Ros attributed the success of Shell Seekers to her theory that it gave her readers permission to dislike their children without ever ceasing to love them’.

And of course she created such characters that live on with you.  When she finished Shell Seekers she wrote: “Everything I love was in that book.  Bohemian people, painters, paintings, Cornwall, the way London used to be. I was terribly bereft when I finished it.  I had walked round the fields talking to all my people for so long and suddenly it was all over. I had nobody to talk to any longer’.

Her dialogue was pitch-perfect. She once told me that she created conversations while hanging washing on the line.

My regret is that I never accompanied Ros to America.  I remember her returning from the September tour – all three weeks of it.  “My dear, in New York at Doubleday bookshop they were lining round the block.  You see, I’m what they call a cult”.

The other bonus for me of Ros’s fame was that I got to know Graham well.  I loved Graham.  Having your wife overnight become the main breadwinner – not to mention a superstar – was a big change for him.  I think he took it very well.  He saw his new role as managing her business affairs. These become complicated when you are translated into over 40 languages and have major film contracts. He was very good at it. So Ros could write in her disciplined way undisturbed.

I remember them both coming down to Oxford for lunch with me and my colleague Michele Topham.   Afterwards they visited our office.  “I’m so pleased we came”, said Ros. “Now I can imagine you here”. “I’m so pleased you approve”, I said,  “because you paid for it”.

I also got to know Ros’s children: first Robin and Kirsty and then Fiona, Mark and Pippa.  Ros was a family person. She talked a lot about her children and her grandchildren and great grandchildren. They were her abiding interest and the centre of her life.  I remember her saying that in those early years in Scotland there had been Graham and his family and her and the children.  They were her World.

Her other world which she had left behind was Cornwall.  She recreated it, with its rugged coves and gentle hills, in most of her novels. Her love of the countryside, of the thrill and the calm of walking in a bracing landscape, she captures to perfection.

As she grew older she found her grandchildren and great-grandchildren an increasing source of delight – and often mirth. She and I spoke regularly on the phone and I remember her uproarious and delighted description of Tamsin’s wedding: “And the bridesmaids were all wearing boots!”

On my last visit to her in August I snapped her chortling with the beguiling Xanthe who Alice had thoughtfully produced to cheer Ros  in the final year of her life.  Ros simply adored that ‘baby’.

Ros loved being able to help her family.  She loved being able to be generous – both in big things and small.  She took enormous interest in my family and always remembered what they were up to.  The three times I produced a baby Ros deftly knitted it a garment.

These qualities of our beloved Ros: the listener, the professional, the appreciator, the countrywoman, the generous family person all fed into and informed her books..  So much of her experience was poured into them. Those brilliant novels will be her lasting legacy long after we are gone.