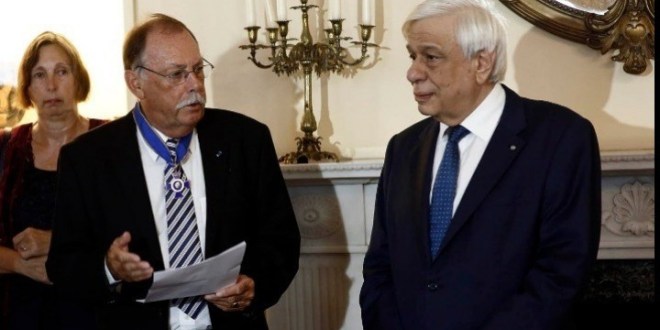 Renowned philhellene and scholar Roderick Beaton has been presented with the Greek Order of Honour this week for his “emblematic contribution” to Hellenic literature and culture, in a special ceremony at the Presidential Mansion in Athens. Professor of Modern Greek and Byzantine History at King’s College, London, Roderick is one of the English-speaking world’s leading authorities on Greek culture and has written many acclaimed and influential books, most recently Greece: Biography of a Modern Nation, published by Allen Lane in March, with a Greek edition coming in early 2020.  His other works include a biography of the Greek writer-diplomat George Seferis, Waiting for the Angel, and an examination of England’s most infamous Romantic poet through the lens of his relationship with Greece and support for its independence, Byron’s War.

Speaking in Greek, Professor Beaton thanked President Prokopis Pavlopoulos “from the bottom of my heart”, calling such recognition “the greatest honour of my entire life”.  He also expressed his gratitude towards his colleagues, in particular the many friends, collaborators, and academic institutions, in Greece and Cyprus, who have helped him in his years of work and research, and reaffirmed the deep love of Greek culture he has harboured since first visiting the country at the age of fourteen.

Warm congratulations, from everyone at FBA, to the newest Commander of the Order of Honour of the Hellenic Republic!