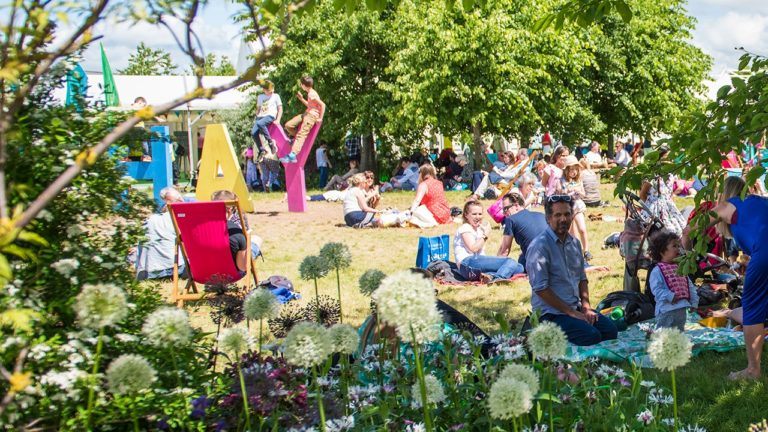 The Hay Festival of Literature & Arts is an annual literature festival held in Hay-on-Wye, Powys, Wales, for ten days from May to June. Devised by Norman, Rhoda and Peter Florence in 1988, the festival was described by Bill Clinton in 2001 as “The Woodstock of the mind”.

This year the festival is running from 23 May to 2 June and with its fantastic mix of the thought provoking and the outright entertaining, it offers a dizzying choice! Here are what our authors will be up to over the 10 days.

On Sunday 26th, Jim Naughtie will be interviewing Bollinger Everyman Wodehouse Prize-winner Nina Stibbe about the third entry in her semi-autobiographical series, Reasons to be Cheerful.

Also on Sunday 26th May, Violet Moller will trace the journey taken by the ideas of three of the greatest scientists of antiquity – Euclid, Galen and Ptolemy – through seven cities and over a thousand years. In tracing these fragile strands of knowledge, Moller will reveal the web of connections between the Islamic world and Christendom. THE MAP OF KNOWLEDGE: HOW CLASSICAL IDEAS WERE LOST AND FOUND.

Rounding off Sunday 26th May, Jonathan Coe will talk to British journalist and documentary maker Sarfaz Manzoor about his latest novel. MIDDLE ENGLAND follows a brilliantly vivid cast of characters through a time of immense change.

On Monday 27th May, Liz Kessler will be talking all things Emily Windsnap. Discover the tricks and treasures she uses to create her worlds both under the sea and on land in this interactive event to celebrate the release of EMILY WINDSNAP AND THE PIRATE PRINCE.

Also on Monday, Antony Beevor, Artemis Cooper, Edward Fox, Bettany Hughes, Joanna Lumley and Simon Schama will come together to celebrate the life and work of John Julius Norwich. With readings from his books and from his edition of his mother’s letters DARLING MONSTER: THE LETTERS OF LADY DIANA COOPER TO HER SON JOHN JULIUS NORWICH.

On Tuesday 28th, Tim Harford and the BBC Radio 4 team will record an episode of More or Less in front of a live audience for the first time. With its trademark mix of humour, current affairs and old-school pedantry, the show explores the numbers all around us in the news and in life.

On Wednesday 29th, David Barrie will join journalist and travel writer Kitty Corrigan and Marc Hamer, author of Catch a Mole: And Find Yourself in Nature, in a discussion about animal wonders. Barrie’s INCREDIBLE JOURNEYS shines a light on the astounding navigational skills of animals of every stripe.

On Wednesday 29th, Lauren St John will join author Nicola Davies and illustrator Yuval Zommer in a discussion about how to save species large and small, on shore and off. All three combine their passion for wildlife and its conservation with their writing and illustrating. St John will discuss how she brings that into KAT WOLFE TAKES THE CASE.

On Thursday 30th, Lucy Worsley will make discuss her wonderfully fresh, vivid and engaging portrait of Victoria in her latest work. In QUEEN VICTORIA: DAUGHTER, WIFE, MOTHER, WIDOW, Worsley shows that though Victoria gave the appearance of being deeply conservative, her diaries show that she was in fact tearing up the rule-book for how to be female.

On Friday 31st, award-winning travel writer, Nicholas Jubber will reveal to the great storyteller Daniel Morden how fantasy realms of gods and emperors, dragons and water-maidens, knights and princesses shaped our world. Reaching back to the era remembered as ‘the Age of Migration’, EPIC CONTINENT: ADVENTURES IN THE GREAT STORIES OF EUROPE explores how attitudes to population movement, borders, kin relations, sex, class and political structures are dramatised in the ancient and medieval epics.

Also on Friday 31st, Peter Frankopan will move through time and history sewing together the threads from different peoples, empires and continents into a phenomenal history of the globe. For children and adults, this extraordinary story about how the east married the west has a remarkable voyage at its heart – the journey along the Silk Roads. THE SILK ROADS FOR CHILDREN.

Peter Frankopan will also discuss THE NEW SILK ROADS with Elif Shafak in a second event on Friday 31st May. In this prescient contemporary history, he assesses the global reverberations of these continual shifts in the centre of power – all too often absent from headlines in the West.

Friday 31st will also see Jonathan Phillips discuss THE LIFE AND LEGEND OF THE SULTAN SALADIN. The Crusade historian will consider Saladin’s complicated legacy, examining the ways he has been invoked in the modern age by Arab and Muslim leaders ranging from Nasser in Egypt and al-Assad in Syria to Osama bin Laden.

Finally on Friday 31st, the historian Roy Strong will present a lavish introduction to the Elizabethan aesthetic. Beginning with the great portrait of the Queen in grand procession with her Garter Knights, Strong explores chivalry, the changing structure of society, the complexities of imagery and heraldic symbols, and the richness of the Elizabethan imagination. THE ELIZABETHAN IMAGE: AN INTRODUCTION TO ENGLISH PORTRAITURE, 1558–1603.

On Sunday 2nd June, AC Grayling will be launching his magnum opus THE HISTORY OF PHILOSOPHY. With his characteristic clarity and elegance, Grayling takes the reader from the world-views and moralities before the age of the Buddha, Confucius and Socrates, through Christianity’s capture of the European mind, to the Renaissance and Enlightenment, and on to Mill, Nietzsche, Sartre and, finally, philosophy today.

Also on Sunday 2nd, Lindsey Hilsum talks to British journalist and feminist Rosie Boycott about IN EXTREMIS: THE LIFE OF WAR CORRESPONDENT MARIE COLVIN. Marie Colvin reported from the most dangerous places in the world, going in further and staying longer than anyone else. She covered the major conflicts of our time: Israel and Palestine, Chechnya, East Timor, Sri Lanka, Iraq and Afghanistan.

The holy texts at the centre of all religious traditions are often employed selectively to underwrite arbitrary and subjective views. They are believed to be divinely ordained; they are claimed to contain eternal truths. But as Karen Armstrong, a world authority on religious affairs, shows in THE LOST ART OF SCRIPTURE, this narrow reading of scripture is a relatively recent phenomenon. Join her on Sunday 2nd to hear more.