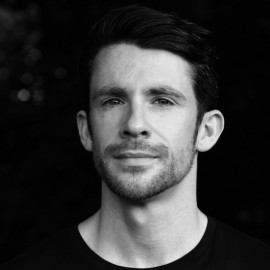 Alan Murrin is an Irish writer based in Berlin. His novel in progress was shortlisted for the Peters Fraser Dunlop Queer Fiction Prize and was long-listed for the Caledonia New Novel Award 2022. In 2021 he was the winner of the Bournemouth Writing Prize for his short story “The Wake”, which went on to be shortlisted for short story of the year at the Irish Book Awards.

Alan is the recipient of an Irish Arts Council Agility Award and an Arts Council Literature Bursary. He is a graduate of the prose fiction masters at the University of East Anglia. His work was featured as part of the New Irish Writing series in the Irish Independent. He writes for The Irish Times, The Times Literary Supplement and The Spectator. His writing on art and photography has appeared in Art Review and The White Review.

Set in County Donegal in 1994, the year before divorce became legal in Ireland, The Coast Road tells the story of two women – Izzy Keaveney, a housewife, and Colette Crowley, a poet. Colette has left her husband and sons to pursue a relationship with a married man in Dublin. When she returns to the community to try and reclaim her old life, her husband Shaun, a successful businessman, denies her access to her children. The only way she can see them is with Izzy acting as a go-between. The friendship that develops between the two will ultimately lead to tragedy for one woman, and freedom for the other. This is a story about the limits that were placed on women’s lives in Ireland not so long ago, and the consequences they suffered for trying to seek independence. The writing is economical and evokes deep compassion for its heroines.