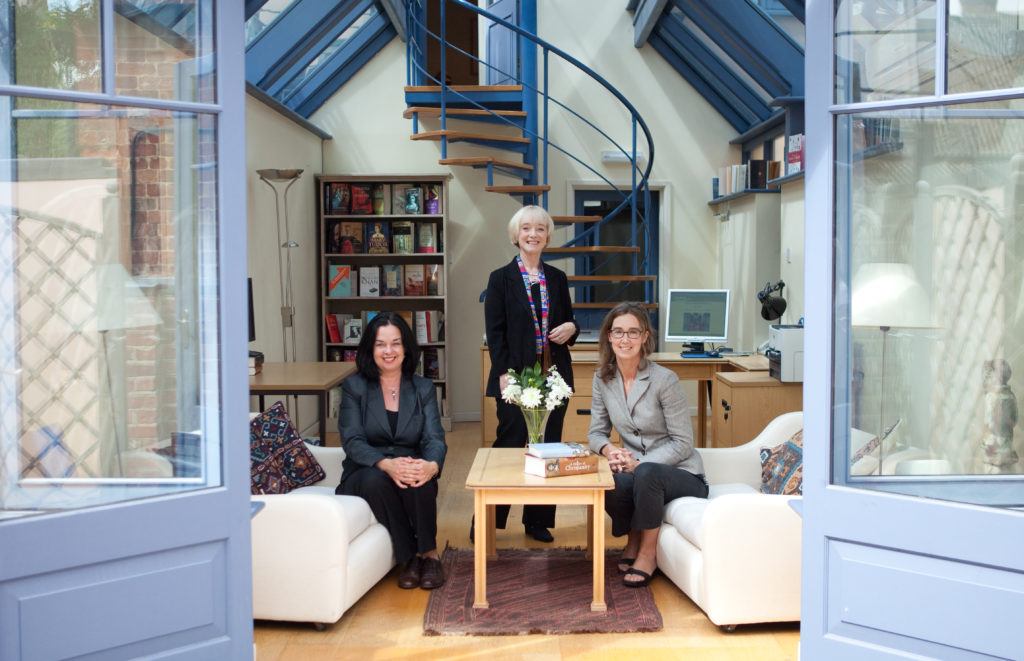 Our agency was founded in 1988 by Felicity Bryan MBE, previously a director at Curtis Brown, and now represents over 200 authors across a wide range of genres. As of 2021 it has four full-time agents and one associate agent, and employs a further team of five.

1973 — Felicity joins London lit agency Curtis Brown, after being plucked from The Economist by mentor Graham Watson, who counted Daphne du Maurier, Gore Vidal and John Steinbeck among his list.

1981 — Felicity moves to Oxford with her husband.

1988 — After spending years commuting to London, Felicity sets up her own agency in an Oxford flat on North Parade, with three aims: to expand her list to include local authors; to encourage academics like Diarmaid MacCulloch, to write for the general trade and get serious money for serious books; and, most importantly, to be a truly international agent and not make London her first point of call. Milan, New York, Munich, Tokyo… all, she vows, will get equal billing.

FELICITY: “The day I phoned my authors to tell them my plan was one of the most moving of my life. They cheered me on. I remember Miriam Stoppard exclaiming: “I’ve been waiting years for you to do this!” Authors are independent beings used to taking risks. So a group, including John Julius Norwich, Mary Berry, Matt Ridley, Martin Meredith and Artemis Cooper, loyally came on board.

1988 — Rosamunde Pilcher, whom Felicity had represented for over ten years, publishes THE SHELL SEEKERS. It goes on to sell more than 5m copies worldwide and spend 30 consecutive weeks at the top of the New York Times Bestseller List, being adapted for both stage and television, twice, and turning Rosamunde into a global publishing sensation. The resulting success allows Felicity to purchase the North Parade flat and begin the process of turning it into the FBA offices you see today.

1991 — New client Karen Armstrong sweeps the board at Frankfurt with A HISTORY OF GOD – Felicity’s first international non-fiction bestseller. It is now a classic, having sold in 40 languages around the globe.

1996 — Local author Iain Pears and his smash historical debut, AN INSTANCE OF THE FINGERPOST, garners $2m in deals before the manuscript is even delivered.  It goes on to sell in 28 languages.

2001 — Having already taken on Michele Topham and Carole Robinson as rights and account managers, FBA takes on its second agent, Catherine Clarke, to represent not only non-fiction but also children’s fiction, a fast-growing market.

FELICITY: “Catherine’s arrival changed everything. We were now an expanding agency with a future. At her first Frankfurt she did a six-figure deal for John Dickie’s Cosa Nostra, which became a worldwide bestseller. She then turned her hand to children’s books—which I knew nothing about—at just the time the market was expanding. She rapidly proved to have a nose for the market: first novels by Jenny Downham and Annabel Pitcher took Bologna by storm. Sally Gardner won the Carnegie and Costa Awards, Liz Kessler became an international brand, and David Almond, author of Skellig, arrived.”

2001 — That same year, associate agent Sally Holloway joins the agency – like Felicity, a fan of representing journalists with books on economics and current affairs – and goes on to make Tim Harford’s THE UNDERCOVER ECONOMIST an international bestseller in 27 languages.

2006 — After a lengthy period of agent-hunting to fill the agency’s gap in adult fiction, former film producer Caroline Wood is recruited to join the expanding FBA team.

FELICITY: “Caroline’s arrival was thrilling. She sold Martin Walker‘s Bruno crime series to Diogenes, which has now sold over 3 million copies worldwide. Anna Hope, Rhidian Brook, Gill Hornby and others have since put us firmly on the international fiction map with amazing bestsellers.”

2010 — Felicity arranges a management buyout, bringing Catherine and Caroline onto the board as shareholders, with Catherine as md.

2010 — Felicity is awarded an Honorary Doctorate from Oxford Brookes University for her work in publishing.

2017 — Catherine is named Agent of the Year at the Nibbies, after a run of amazing successes, most notably with Peter Frankopan‘s worldwide bestseller THE SILK ROADS and its follow-up.

2018 — The three-month paid internship programme begins, overseen by Carrie. To date, it has provided two full members of staff and seen interns go on to jobs in publishing and agenting alike.

2018 — FBA takes over the client list of Peake Associates, ahead of Tony’s retirement, including Jonathan Coe, Damon Galgut and Jon Savage, among many others.

2019 — Carrie is promoted to the Board of Directors.

CATHERINE: “Carrie’s dynamism, intelligence, ideas, and sense of humour have been a fantastic addition to the agency and we are all very happy she will be a key part of our future. She has energetically expanded her list of authors, which includes bestselling journalist and activist Reni Eddo-Lodge; Will Eaves, winner of the 2019 Wellcome Book Prize; Tom Nancollas, whose Seashaken Houses was a Waterstones Book of the Month; Alex Reeve, author of Richard and Judy pick The House on Half Moon Street; and authors of Taking Up Space, Chelsea Kwakye and Ore Ogunbiyi, now being turned into a TV series by the people behind Killing Eve.”

2019 — THE HARE WITH AMBER EYES, THE SILK ROADS, and WHY I’M NO LONGER TALKING TO WHITE PEOPLE ABOUT RACE all named Books of the Decade by the Times and the Observer.

2020 — After having three of the fifteen shortlisted titles – IN EXTREMIS, FURIOUS THING, and MIDDLE ENGLAND – FBA takes home a fifth Costa with Jonathan Coe’s wonderful and timely novel, already the winner of the Prix du Livre Européen.

2020 — Felicity receives an MBE for services to publishing in a small ceremony in her garden.

2020 — Reni Eddo-Lodge becomes the first Black-British author to ever top the UK charts. Her book will go on to spend over 52 weeks in the Sunday Times bestseller list.

2020 — In an unprecedented autumn that saw thousands of Covid-delayed titles released alongside the usual ‘Super Thursday’ flood, Richard Ovenden’s seminal BURNING THE BOOKS secures the coveted Radio 4 Book of the Week slot, and Mary Berry’s new cookbook, SIMPLE COMFORTS, captures the nation’s heart, shooting to #1 in the charts.

2020 — Mary Berry receives a Damehood for services to broadcasting in the Queen’s Birthday Honours List.

2021 — FBA author Michael Wood receives an OBE for services to public history and broadcasting in the New Year Honours list.

2021 — After scooping both the Times and the Sunday Times Children’s Book of the Year, Natasha Farrant’s “sensational” VOYAGE OF THE SPARROWHAWK wins the Children’s Costa Book Award, from a shortlist which also included Meg Rosoff’s “irresistible” THE GREAT GODDEN.

2021 — Angelique Tran Van Sang joins as agent. Angelique was previously a commissioning editor at Bloomsbury and was named a Bookseller Rising Star in 2020. In her first year, she sells poet Amy Key’s dazzling debut non-fiction book, ARRANGEMENTS IN BLUE, to Jonathan Cape in a seven-way auction.

2021 — FBA launch the Felicity Bryan Publishing Mentorship Scheme, an annual three-month paid mentorship programme aimed at an anyone from an underrepresented background. The scheme is generously supported by Felicity’s family, and reflects her own energetic nurturing of talent and potential in young people starting out on their careers. Primarily based at our offices, the scheme includes a range of industry placements at partnership organisations. Following her mentorship, our inaugural mentee Niktaa Amirkhalili lands an internship at Profile Books and then joins RCW as Agent’s Assistant.

CATHERINE: “We are proud to be honouring Felicity’s memory with a scheme designed to open up the commercial workings and creative highlights of our wonderful industry to talented individuals who might otherwise not have that opportunity. And we are immensely grateful for the generous participation of our partners in providing depth and variety to the programme.”

2021 — Damon Galgut wins the Booker Prize for his ninth book, THE PROMISE, after being shortlisted twice for THE GOOD DOCTOR and IN A STRANGE ROOM. THE PROMISE is described by the judges as ‘A tour de force… A spectacular demonstration of how the novel can make us see and think afresh’ and enters The Sunday Times Bestsellers List.

2022 — Our brilliant agent, Caroline Wood, is shortlisted for Literary Agent of the Year at the 2022 British Book Awards. The judges praise her agenting of the 2021 Booker Prize-winner, Damon Galgut‘s THE PROMISE, and the new deals she has struck for long-term clients including Anna Hope and Liza Klaussman.