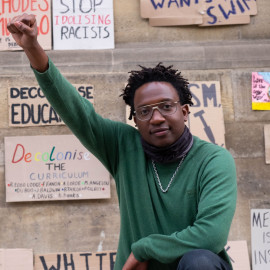 Originally from Zimbabwe, he moved to the UK to complete his secondary and university education. He has an eclectic professional and academic background, having studied African history and politics, public health and medicine. Before coming into academia, he worked in the NHS for three years. He is also one of the founding members of Rhodes Must Fall in Oxford, and has become a leading voice in public debates on the cultural politics of colonialism and racism.

Simukai is currently writing his first book for the trade, When Will We Be Free? Living in the Shadow of Empire and the Struggle for Decolonisation, which will be published by The Bodley Head in 2024. This book will combine memoir, political history and cultural criticism to show how colonialism continues to shape politics, society and culture in Africa and in Britain and to explore what it really means to decolonise.