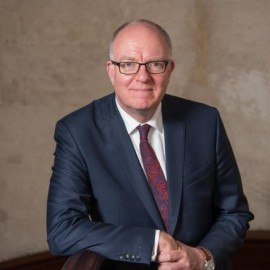 Richard Ovenden is Bodley’s Librarian, the 25th person to hold the senior executive position in the library of the University of Oxford. Since 1987 he has worked in a number of important archives and libraries, including the House of Lords Library, the National Library of Scotland (as a Curator of Rare Books) and in the University of Edinburgh, where he was Director of Collections. He moved to the Bodleian Libraries in 2003 as Keeper of Special Collections, becoming Deputy Librarian in 2011. Richard was awarded the OBE in The Queen’s Birthday Honours, 2019.

Richard has written extensively on professional concerns of library and information management, and on the history of the deliberate destruction of knowledge. Burning the Books: A History of Knowledge Under Attack (2020), was published by John Murray in the UK and by Harvard University Press in the US. It was a Radio 4 Book of the Week and a Times Book of the Year. ‘”Passionate and illuminating… this splendid book reveals how, in today’s world of fake news and alternative facts, libraries stand defiant as guardians of truth” — The Times.