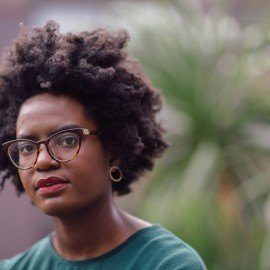 Reni Eddo-Lodge is a London-based, award-winning journalist. She has written for the New York Times, the Voice, Daily Telegraph, Guardian, Independent, Stylist, Inside Housing, the Pool, Dazed and Confused, and the New Humanist. She is the winner of a Women of the World Bold Moves Award, an MHP 30 to Watch Award and was chosen as one of the Top 30 Young People in Digital Media by the Guardian in 2014. She has also been listed in Elle‘s 100 Inspirational Women list, and The Root‘s 30 Black Viral Voices Under 30.

In 2020, she became the first Black-British author since records began to top the overall Nielsen charts, and in 2021 she received a Nielsen Gold Bestseller Award for sales surpassing 500,000.