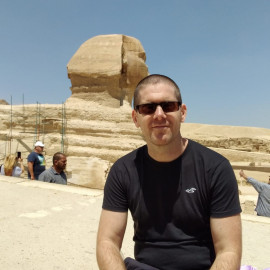 Dr Owen Rees is Associate Lecturer in Ancient History at Manchester Metropolitan University, where he specialises in the transition of soldiers from civilian life to the battlefield and back again. His books on the topic of ancient Greek warfare include Great Battles of the Classical Greek World (Pen & Sword, 2016); Great Naval Battles of the Ancient Greek World (Pen & Sword, 2018); and Military Departures, Homecomings, and Death in Classical Athens: Hoplite Transitions (Bloomsbury Academic, 2022).

Rees is also the founder and lead editor of the website BadAncient.com, which brings together a growing network of specialists to fact-check common claims made about the ancient world and expose the prevalent pseudohistory in the modern day.

Owen’s first trade book, The Far Edges of the Known World: A New Perspective On Our Ancient Civilizations, will be published in the UK by Bloomsbury in 2024 and by Norton in the US. In this major work, Rees steers us to a fresh look at the ancient world, turning our attention to the peripheries to tell the stories of everyday ancient people and showing how extensive archaeological excavations have shed new light on cultures that are often overlooked.