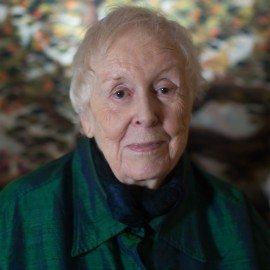 Liza Picard (1927-2022) was born in Essex and read law at the London School of Economics. She was called to the bar by Gray’s Inn in 1949 but never practised; after various jobs, including a spell in East Africa in the Colonial legal service, she found a job in the Solicitor’s Office of the Inland Revenue, where she stayed until her retirement in 1987.

Only after her retirement did Liza begin to write the kind of social history books that she had been trying to find: books that described the everyday life of ordinary London people – if people are ever ‘ordinary’. In an interview in the Guardian, she told John Cunningham “I am not a properly trained historian. I am a lawyer by trade, and an inquisitive, practical woman by character.”

Liza was the author of four highly successful, bestselling and critically acclaimed books about London’s history, Restoration London, Dr Johnson’s London, Elizabeth’s London (a Sunday Times bestseller) and Victorian London, all published by W&N in the UK and St. Martin’s in the US. In her last, Chaucer’s People (2017), she used the characters in the Prologue to Chaucer’s Canterbury Tales as ‘hooks’ on which to hang a vivid description of English life in the fourteenth century. Peter Ackroyd describes her writing as “absorbing and revealing in equal measure.” Liza died in London at the age of 94.