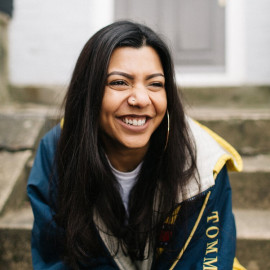 Kieran Yates is a London-based journalist, broadcaster and editor who has been writing about culture, technology and politics for over 10 years. She’s written everywhere from the Guardian, FADER, VICE, The Independent and beyond, had an acclaimed monthly column at VICE titled ‘British Values’, was nominated for Culture Writer of the Year in 2016 and regularly hosts events and panels discussing issues across music, politics, and news.

Kieran contributed to the award-winning book of essays, The Good Immigrant in 2017 about immigrant stories in the UK, where she wrote about ‘Going Home’. In 2015 she started a fanzine called ‘British Values’, a political satire and culture magazine that celebrates immigrant communities in the UK. She is the co-author of Generation Vexed: What the English Riots Didn’t Tell Us About Your Nation’s Youth published by Random House in 2011, and was part of the Guardian’s ‘My Favourite Album’ eBook in 2011.

Kieran is currently working on her debut book about home and the housing crisis titled All The Houses I’ve Lived In, to be published by Simon and Schuster, out Spring 2023.