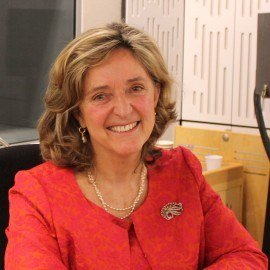 Dame Claire Bertschinger is Director for the Diploma in Tropical Nursing Course at the London School of Hygiene and Tropical Medicine. She is credited with inspiring the global fundraising phenomenon, Band Aid and Live Aid, generating around £150m for starving people in Ethiopia.

Her work in the country in 1984, when the effects of civil war and famine led to desperate conditions for the population, was captured in a news broadcast that had a global impact. During that time, Dame Claire was a field nurse for the International Red Cross, at a feeding station at Mekele, where tens of thousands of refugees had gathered in the hope of getting food. Organising a feeding centre for children, she could provide meals for only 300 a day, when thousands more were starving.

Dame Claire’s many awards include the Florence Nightingale Medal, Woman of the Year Window to the World award, and being appointed Dame Commander by Her Majesty the Queen.

Dame Claire’s memoir Moving Mountains was published by Penguin in 2010. The Daily Express called Moving Mountains ‘incredibly inspiring’ and The Sunday Times praised it as ‘a harrowing, emotionally charged account’. 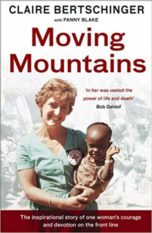