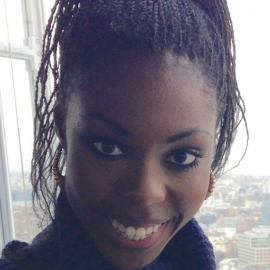 Prior to this, she undertook an MPhil at the University of Oxford in Portuguese Studies, funded by the Ertegun Scholarship in the Humanities, achieving a Distinction; and she completed a BA Hons in Portuguese and Brazilian Studies at Kings College London, University of London, achieving a First Class Honours with Distinction.  She is a linguist, working in both Portuguese and French.  Her research has also been published in the major refereed journal Atlantic Studies. She was awarded a pre-doctoral fellowship at the Library of Congress, Washington DC from 2018–2019 in recognition of the originality of her research.

Adjoa’s research is comparative and transnational in a broad Atlantic frame, exploring race in the context of Latin America, with particular focus on racialized and gendered experiences in art and performance in early-twentieth-century Brazil; and within Francophone Studies, concentrating on representations of race in artistic modernism in early-twentieth-century France and the USA. She is committed to working across languages and challenging Anglocentric approaches in Arts and Humanities research. As a BBC New Generation Thinker, Adjoa has a growing portfolio of public engagement and media work.