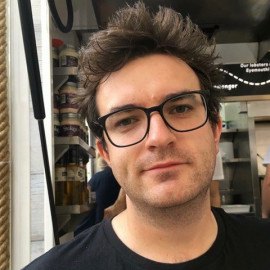 Alex is an author and tutor of English Literature at the University of Edinburgh. His first book Library Cat (Black & White Publishing) arose out of a viral Facebook weblog, and has since gone on to sell in Korea, France, and Italy, where it is an Elefanti Bestseller. In 2017, it earned him the Beryl Bainbridge Award at the People’s Book Prize.

Alex’s fiction and poetry has appeared widely in journals such as The London Magazine, Aesthetica and Gutter. It has also earned him shortlistings for the Melita Hume Prize, the Jane Martin Prize and a winning place in the Charles Causley International Poetry Prize, judged by Sir Andrew Motion. He has been invited to perform his work at multiple events and festivals, including Rally & Broad, the Hidden Door Festival and the Edinburgh International Book Festival.

Alex also holds a PhD on Philip Larkin’s poetics of place, which was funded by the Arts and Humanities Research Council, and published Larkin’s Travelling Spirit with Palgrave in 2021. He reads for the James Tait Black Memorial Prize and is currently working on a YA novel.